Teide Cable Car celebrated its 40th anniversary in 2011/2012. An engineering challenge shared by all the people of Tenerife. 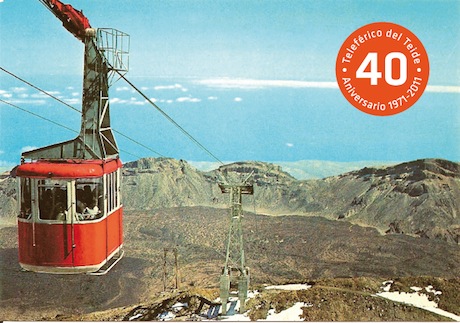 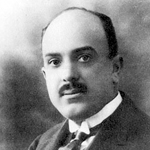 Throughout out history various ideas and proposals were made to build a cable car that would make it easier for visitors to ascend Teide. However, the only project that was finally carried out was that of Andrés de Arroyo y González de Chávez. In a trip to Germany and Switzerland in 1929, he was impressed by the number of cable cars in the regions he visited and the magnificent vistas that he could enjoy from the upper stations.  Upon his return he worked tirelessly to build a cable car on Teide that would make it easy for all visitors to ascend to the peak and enjoy the marvellous vistas from the summit. 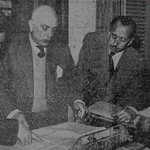 The initial construction project was prepared by the engineer from Caminos Canales y Puertos, José Ochoa Bejumea, in 1930.  It was a aerial funicular system divided in two sections. The first would connect Montaña Majúa with Montaña Fría with two passenger cabins with a carrying capacity of 35 people, going in opposite directions . From this station the second section would feature a single passenger cabin, with a capacity for 15 people, to the terminal station.  In 1960, the account and final construction project, based on the original project written by Ochoa.  The final project moved the initial station from Montaña Majúa to its current location, thereby eliminating a tower and reducing the use of cable.  The final cable car project was written by the engineer of Caminos, Canales and Puertos, Miguel Pintor Domingo and the the industrial engineer Francisco Trujillo Armas. 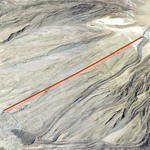 The route was chosen to take advantage of the sloping terrain, which made it easier to install the towers, putting the lower station in line with the only spot that the intermediate station, since it was of solid rock.  In addition, this route also allowed the final station to be reached without using towers. 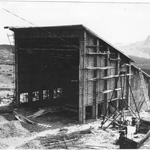 The construction of the cable car began in April, 1962, with the placement on the terrain of the route that the installation and land surveys would follow.  This work was finished in 1963, allowing the exact location of the stations and the four towers that hold up the cable to be determined.

The construction began on September 4, 1963, with the excavation to build the access road to the initial station. It took 8 years to build the cable car, finishing on July 27, 1971 with the signing of the provisional reception act of the first section of the cable car.  The main difficulties arose during winter, when snowfall and low temperatures made it only possible to work on the lower station, in the best of cases.

Initially, construction material was transported up using donkeys, or on the shoulders of the workers themselves, until a hoist was installed and in 1967 an auxiliary cable car was put into operation which allowed the project to advance more quickly. The public works and foundation was carried out by the company, Entrecanales y Tabora S.A. The installation of the cable car was carried out by the Italian company, Ceretti e Tanfani S.A. 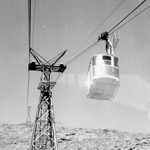 The cable car was inaugurated on July 18, 1971. On August 2 of the same year it began to operate, starting a new adventure on the Canary Islands, a unique project that from its inauguration has been enjoyed by all of our visitors. 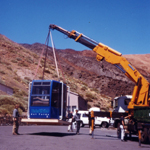 Between 1999 and 2007 the installation was renovated, replacing the existing cabins with a more modern and aerodynamic design. The cables and the towers were also replaced.  The stations were also remodelled, adapting them to new needs and improving their integration into the surroundings. All of the machinery and the electrical centre were also renewed. In addition, the security and control systems were changed and a periodic maintenance and safety plan was established.