A ride in the cable car is the only way to enjoy marvellous routes on your visit to Mt Teide: Route No. 10 to the Crater of Mt Teide, Route No. 11, La Fortaleza Vantage Point and Route No. 12, Pico Viejo Vantage Point. 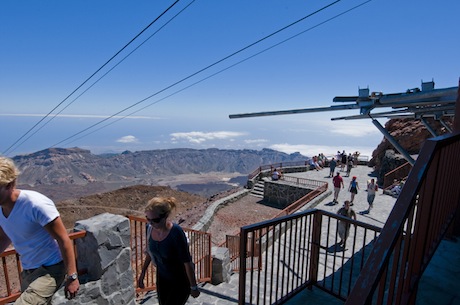 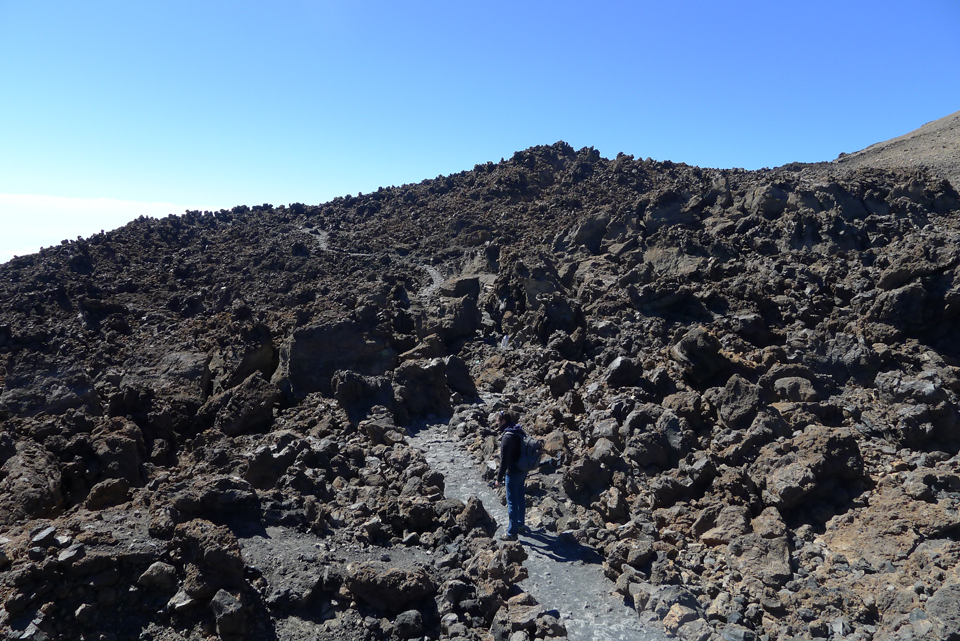 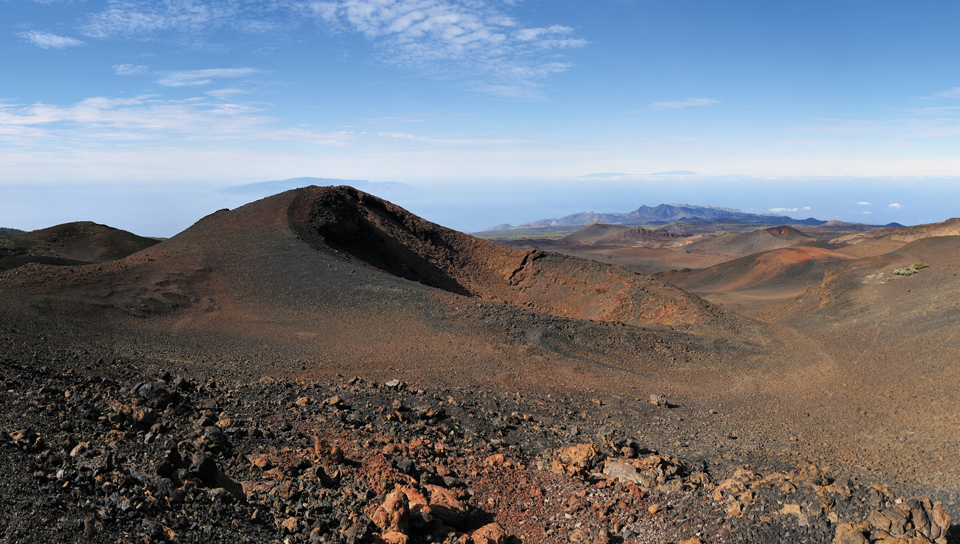 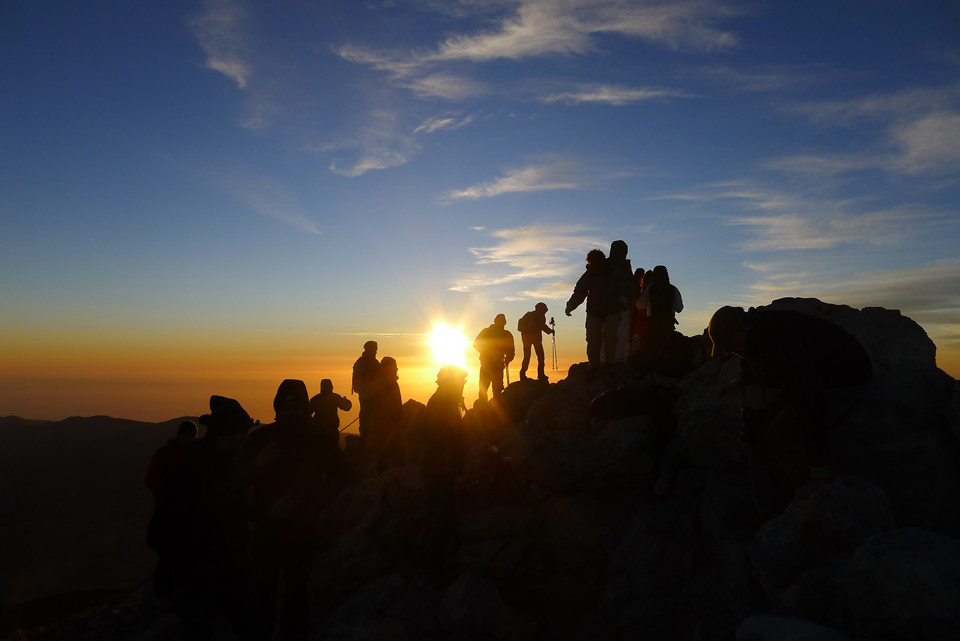 Route No. 10 (Telesforo Bravo) to the Crater of Mt Teide 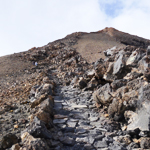 The route to the crater of Mt Teide takes you to Spain's highest peak. You start out at the upper station and follow the rocky path to La Fortaleza Vantage Point. Shortly, you see a path to your left that begins to climb steeply towards the summit. You can only begin the ascent if you are in possession of a permit issued by the offices of the national park. The altitude and the strong smell of sulphur given off by the numerous fumaroles in the area make progress difficult. It is wise to climb slowly, making the most of short stops to feel the island throbbing beneath your feet and breathe in the icy air around you.

The path switchbacks up the southeast slope, drawing ever closer to the narrow lip from where you can contemplate the mysterious crater. Once at the top, the yellowy-green depths of the crater conjure up violent eruptions of the past, while in the distance you can make out the other Canary Islands: La Palma, El Hierro and La Gomera to the west, and Gran Canaria, Fuerteventura and Lanzarote to the east. We recommend you stay the night at Altavista Refuge, rise before dawn and climb up to the peak to observe the first rays of sun and the gigantic shadow of Mt Teide projected over the sea.

The trails are managed by Teide National Park; for information on current conditions of trails you should contact the national park by phone +34 922 92 23 71 or email maot@gobiernodecanarias.org  Monday to Friday between  9 and 14h. 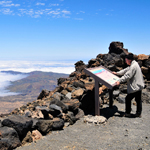 The route to La Fortaleza Vantage Point heads northeast, offering you a glimpse of the most perfect side of the volcanic cone of Mt Teide. In a few kilometres, this sheer mountainside plunges into the depths of the ocean. The path is practically flat, but the altitude makes walking extremely tiring. The cone of Mt Teide lies to the left, and to the right, you can catch sight of the unspoiled, gleaming hillside of Montaña Blanca and the black lava flow—a vestige of old eruptions and part of route no. 7 (to Altavista Refuge)—which passes by the mountain hut and joins the path just before the vantage point. This incredible spot takes in magnificent views of the entire north side of Tenerife. In the centre, La Orotava valley, and the long ridge of Monte de la Esperanza that disappears in the distance and melds with the rugged Anaga Massif. Your eye will be drawn to tiny white dots: these are the domes of Teide Astrophysics Observatory, adjacent to the Izaña Atmospheric Research Centre. The reddish escarpment of Riscos de La Fortaleza marks the boundary of the vast pine forest of La Orotava, the green treetops giving way to the intense blue of the Atlantic. 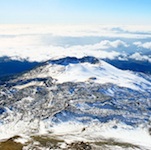 Practically flat and perfectly located, the path to Pico Viejo Vantage Point heads towards the western side of El Pilón and offers a magnificent view of the crater of Mt Chahorra—otherwise known as Pico Viejo—800 m in diameter and 3,104 m above sea level. Mt Teide last erupted in 1798, spewing lava flows for 3 months through craters known as Las Narices del Teide or Teide's Nostrils. The path overlooks the entire south side of the island, offering spectacular vistas and the chance to admire the great caldera and its enclosure of sheer walls of rock, with Mt Guajara towering splendidly above. From here you can see how the lava gushed down the slopes of the volcano almost to the sides of the cirque, pick out the various cañadas or pumice stone plains that skirt the caldera, and glimpse the whimsical rocky formations of Los Roques de García not far from the Parador hotel. The path ends at the vantage point from where you can marvel at the multi-coloured crater of Pico Viejo and Los Gemelos, and enjoy breathtaking views of the coastline of south Tenerife, its villages, tourist resorts and airport, and in the foreground the splendid pine forest of Vilaflor. The island of La Gomera is so close you feel you reach out and touch it, and in the distance you can catch a glimpse of El Hierro and La Palma.

The trails are managed by Teide National Park; for information on current conditions of trails you should contact the national park by phone +34 922 92 23 71 or email maot@gobiernodecanarias.org  Monday to Friday between  9 and 14h.