These are always active, as they are essential for the functioning of the website. They allow us to record your preferences as you browse the website during an individual session or, if you so request, from session to session. They also speed up the operation of your shopping trolley and the purchasing process in general - in addition to providing security and ensuring that legal requirements are met.

These optimise the performance of the website by monitoring its use. In some cases, they speed up our handling of your orders, because they enable us to record the preferences you select on the website. You should activate these if you would like to receive recommendations tailored to your preferences, and also to keep the operation of the website at optimum speed.

Check the access restrictions to the Park during the mouflon population control operation here.

Sunset and stars on Teide excursion for groups

Sunset and stars on Teide excursion for groups

Experience the excitement of watching the sunset from the highest peak in Spain with the Sunset and Stars on Teide tour; taste a delicious cocktail dinner designed by Erlantz Gorostiza, a renowned chef awarded two Michelin stars, and observe the stars in one of the best places on the planet to stargaze.

Come and enjoy Tenerife’s most exclusive tour to enjoy Mt. Teide by night to the fullest.

The Teide Cable Car is all yours at sunset

Come and ascend up to 3,555 m above sea level to fly over craters and lava flows and enjoy the highest sunset in the Sunset and stars on Teide tour.

On the Sunset and Stars on Teide tour, you will have exclusive use of the cable car and the privilege of beholding the spectacular sunset from an altitude of 3 718 m.

You won’t stop sharing on your social networks the photographs of what would probably be one of the best sunsets you have ever seen! 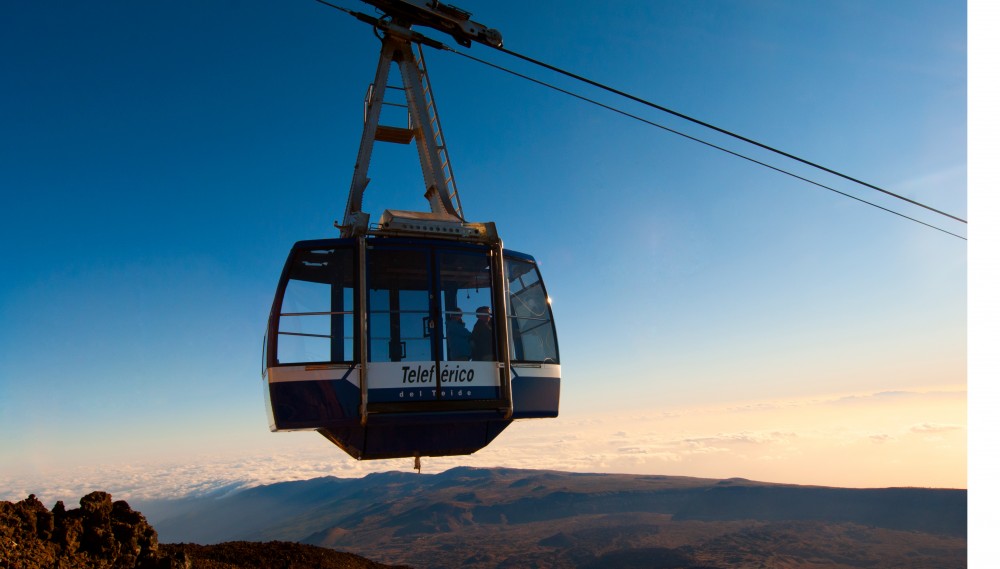 On the Sunset and Stars on Teide tour, not only will you ride your own private cable car. You will also behold Teide’s shadow!

In Tenerife, you will find one of the best places to observe the formation and evolution of the shadow of a mountain. In this case, the shadow of Mt. Teide.

Thanks to the height of the volcano and due to the fact that the views from its summit extend to all horizons it is possible to behold the spectacle of Teide’s shadow cast towards the island of Gran Canaria.

It’s one of the most beautiful and spectacular moments that the volcano offers its visitors and it is included in this tour to enjoy Mount Teide by night! 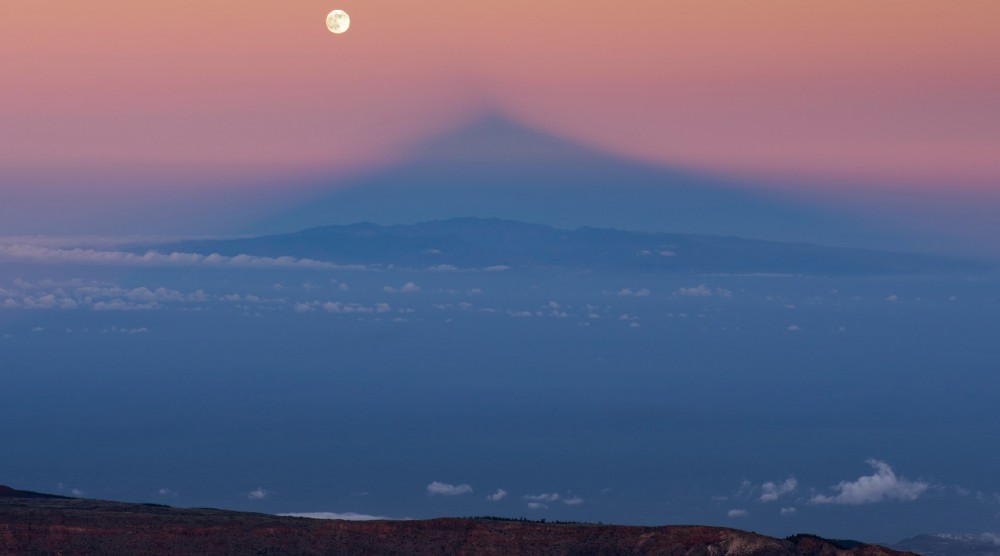 You will always remember the sunset from Pico Viejo in Tenerife

The Sunset and Stars on Teide activity includes a guided tour along the spectacular trail to the Pico Viejo viewpoint.

This trail is a wonder in itself!

From the trail to the Pico Viejo viewpoint, you will have the opportunity to see, in the distance, part of the lava poured during the eruptive process that took place on Mount Teide in 1798 and lasted three months.

That historical eruption formed the “Teide’s Nostrils” or “Las Narices del Teide”, the craters located on the western slopes of Pico Viejo which spewed out lava in 1798.

On the Sunset and Stars on Teide tour, with the assistance of our guides, you will discover all of the volcanic wonders that surround this impressive trail to the Pico Viejo viewpoint. The trail and the surrounding scenery acquire a truly remarkable array of colours at sunset, which unforgettable to visitors. In fact, you will always remember this fantastic night tour to Mount Teide.

If the weather permits, you will experience a unique view over the neighbouring islands of La Gomera, El Hierro and La Palma, with the impressive Pico Viejo crater at your feet, which is 800 m in diameter and at one time, hosted an impressive lava lake.

After all the emotions experienced during the sunset with the Cable Car on the Sunset and Stars to Teide tour and before you immerse yourself in the fascinating world of the Universe, let us treat you to a cocktail dinner full of traditional savours of the Canary Islands, served at the Teide Cable Car base station, designed by Erlantz Gorostiza, two-Michelin-starred chef of M.B restaurant, made with products typical to the island of Tenerife and accompanied by excellent local wines.

What more can you ask for of a night tour to Mount Teide?

After dinner, when you think it’s not possible to feel more excited, the spectacle of the shadow of Teide will astound you.

On the Sunset and Stars on Teide tour, you will make an instructive astronomical observation with the naked eye and using professional telescopes in the company of Starlight guides, in one of the best places on the planet, and the best place in Tenerife, to stargaze.

Because, along with Chile and Hawaii, the Canary Islands are one of the three best spots on Earth to observe the sky, and from Mount it is possible to see 83 of the 88 existing constellations.

On the Sunset and Stars on Teide tour, our Starlight guides will unravel for you the mysteries of the starry sky of Europe’s most visited national park.

During the astronomical observation included in this exclusive night tour to Mount Teide, you will learn how to guide yourself thanks to the sky.

You will also discover the elements of Greek mythology that hides behind the constellations and the relationship between them.

The astronomic observation included in this complete excursion to Teide by night will be held in a area, close to the Teide Cable Car base station.

Thanks to our professional state-of-the-art telescopes, which you will have at your disposal during the astronomical observation on the Sunset and stars on Teide tour, you will discover planets, galaxies and clusters as you have surely never seen before, and you will go through the most interesting celestial objects of every night.

In addition, during this starry part of the most exclusive night tour to Mount Teide in Tenerife, our guides will provide you with interesting information about the objects you observe through the telescopes.

We are sure that the professional astronomical instrumentation, along with the quality and transparency of the sky above the summits of Tenerife, will give you a unique experience.

As you already know, the moon passes through different phases during its 29-day cycle, that is to say, lunation.

Therefore, at least once a month, its potent glow will dim the faint light of the distant stars.

If you make a reservation to enjoy the most exclusive night tour in Tenerife and stargaze on Mount Teide on the night of the full moon, you will take advantage of its radiant appearance and be delighted with its splendour: mountain ranges, craters and other lunar wonders.

If you haven’t known that you can find the Montes Teneriffe, Mons Pico and the crater Piazzi Smyth on the Moon, ask our guides on the night of your Sunset and Stars on Teide tour where they are located and why they have these names.

The Volcano Teide Experience team, formed by members of our customer service and reservations department, multilingual Canary Islands official guides, Starlight guides and dinner service personnel will accompany you throughout the activity Sunset and Stars on Teide so that you can enjoy each and every detail of the most exclusive experience if the Canary Islands that we have carefully selected for you.

The start time of the activity Sunset and Stars on Teide is adjusted based on the sunset time, so it varies depending on the time of year.

Pick-up time depends on the sunset and the pick-ups scheduled for each day; it will be announced beforehand. For this reason we need you to provide the name of your hotel or address of accommodation, as well as a mobile phone number at the time of booking.

We will pick you up at the main entrance to your hotel or place of accommodation, or from a previously established nearby location.

If no pick-up is scheduled, the meeting point is at the Teide Cable Car base station:

To make the most of this exclusive night tour to Mount Teide, please follow our recommendations:

IT IS NECESSARY TO PRODUCE THE BOOKING CONFIRMATION

Sunset and Stars changes and cancellations

In the event that weather conditions impede the operation of the cable car for the activity, the sunset shall be enjoyed either from the Chío viewpoint or from Los Roques de García, and the price of the cable car return ticket shall be reimbursed to non-residents at the following rates: Adults €27.00; Children €13.50.

In the event that it is not possible to carry out the astronomical observation, our guides will use audiovisual equipment to interpret the night sky.

If you cancel the activity, the following charges will apply:

Check our Terms and conditions for information on other reasons for cancelling this night tour to Mount Teide.

The Teide Cable Car base station has a free car park with 220 parking spaces.

The base station’s facilities include an information centre and a shop.

There are public toilets at the Teide Cable Car’s base station.

In case of discount tickets for children or local residents, a supporting document is required to prove entitlement to discount.

Balls of gofio (dough made from roasted corn, millet or barley grains) with nuts, dried fruit and honey

Corncobs and ribs with potato cream and coriander oil

Samosas (fried pastry) with a filling of rabbit in salmorejo marinade

Are you a vegetarian or your diet has special requirements and you do not see enough choices on the menu? Once you have made your reservation, send an e-mail with your booking locator to reservas@volcanoteide.com and tell us your requests, so you can fully enjoy the cocktail dinner. 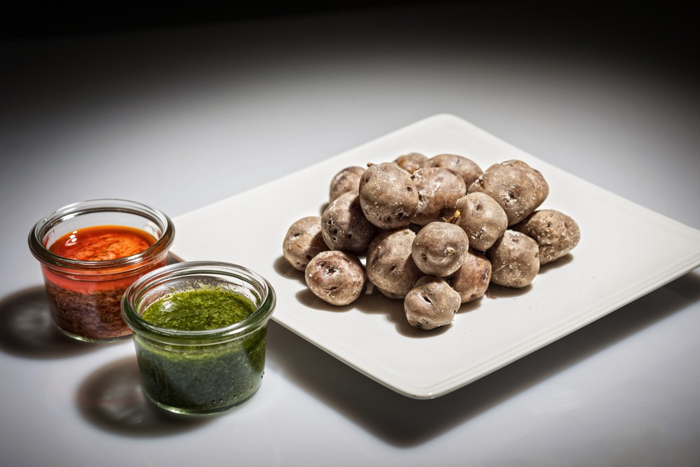 Teide Cable Car is well connected by roads, and can be easily reached from any point of the island.

If you are in the northern part of the island

If you are in the southern part of the island

If you are close to Santa Cruz or La Laguna

Mt. Teide is approximately an hour’s drive from any point on the island. 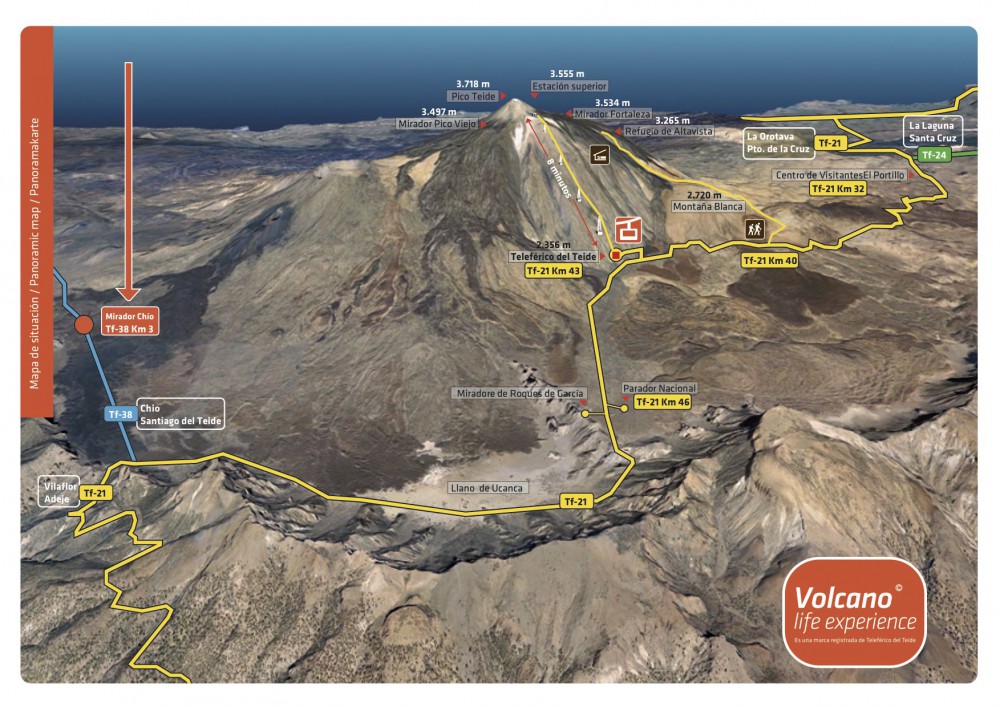 There are no reviews yet
Home    Groups